The Guild meets primarily as a critique group, averaging ten to twelve in attendance on any given week and we critique three presented scenes. During this season of COVID-19 pandemic, we are meeting via Zoom Conferencing. Among our writers are:

CAROL DEMENT  writes mainstream/historical fiction. Her first novel,  Saving Nary , was a finalist in the 2017 Next Generation Indie Book Awards, a first prize winner in the 2018 North Street Book Awards and an Honorable Mention in the 2019 Writers Digest Self-Published Book Awards.  Saving Nary,  a tale of Cambodian refugees resettling in the Pacific Northwest, is available in print or Kindle editions at Amazon.com, or can be ordered by your  local bookseller. She is currently at work on her second novel, due in 2022.

DANIEL RICE While not entertaining a pair of young lads or pulling the 9 to 5, Dan writes fiction, mostly speculative. His debut YA novel Dragons Walk Among Us was recently released, and he is currently working on the sequel. To read his thoughts on writing and view his complete bibliography, please visit https://danscifi.com. 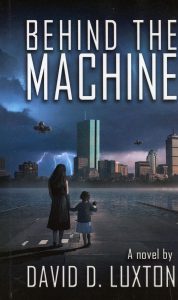 DAVID D. LUXTON writes science fiction thrillers and non-fiction. He is a former military psychologist and research scientist and has authored more than 100 academic publications in the fields of artificial intelligence, ethics, and psychological health. His first novel, Behind the Machine, tells a foreboding tale about the perils of AI and oligarchical control of it. He is also Associate Professor in Psychiatry and Behavioral Sciences at the University of Washington in Seattle, a U.S. Air Force veteran, and founder of the Wayfarer Records music label. In 2020, he launched Mysterious Light Press (www.mysteriouslightpress.com), a spin-off from his music publishing company. Visit his website at: www.davidluxton.com

HAL DYGERT Educated and employed as a geologist and as an attorney, Hal Dygert writes hard-boiled crime fiction.  He has set novels in the wilds of south-central Connecticut, among wheat and alfalfa ranches east of the Cascade Mountains in Washington State, and on the muddier shores of the Columbia River. Visit his website at www.HalDygert.com

KATHLEEN COLVIN is a cozy mystery writer. Her 10-book series is set in an Oregon coastal town full of interesting characters and plot twists that’ll leave you guessing until the end. Before turning to fiction, she wrote two books about regional history and architecture published by an academic press. Contact her at kathleencolvin.com.

LAURA SWAN writes contemporary fiction and historical fiction. She is the author of five non-fiction books. One — The Forgotten Desert Mothers: Lives, Sayings, and Stories of Early Christian Women — has been translated into many languages, including Chinese. Her most recent book is Wisdom of the Beguines: the Forgotten Story of a Medieval Women’s Movement, all available at your favorite independent bookseller.

MICHAEL KRAMER’S poetry has appeared in numerous literary magazines. “For Despairing Love on Prozac” (The Pacific Review, Vol. 24, 2006) was nominated for a Pushcart Prize. Swan Duckling Press published After the Waking Time, a chapbook, in 2002. Moon Tide Press published Hopeless Cases, a sequence of poems set in a fictitious boys boarding school, in 2011. A number of short stories have been anthologized. He’s expressed views on personal and the literary life, most recently “Marriage: A Travel Guide” (thecresset.org/2018/Trinity/Kramer_T18.html). Retired, Kramer continues work as a writing coach with writers on fiction and non-fiction. He serves on the advisory board to the Coffee House Writers Group. Four completed novels combining mainstream and literary fiction with traits of romance await some eager agent. He currently is at work on a fifth novel, The Mad Queen and Lavender Farm. After retirement, Kramer relocated to Lacey, WA. Interested parties can find work and commentary through Facebook, @michaelkramerwriter.

PATRICIA MCCLURE brings a delightful medley of experiences to bear – as a counselor, as a boutique day care provider, as a mother of five, and as a Benedictine oblate of an abbey in the Pacific Northwest.  Patricia’s gift and passion are to tell tales of her protagonists’ struggle to balance their emotional, spiritual, and intellectual journeys with the constant, unexpected challenges life relentlessly throws their way.

Her three-book series The Benediction of Paul and its prequel The Making of an Abbot are set in and around a fictional abbey in eastern Montana. The story tells of a struggling monastery and two monks who become the foster parents for an orphaned child.  Her protagonists struggle to find and define their roles as men, monks and fathers.  Each man must use his knowledge, strength, and courage to turn away from the destructive elements of church, self, and community to embrace the positive, the scared and to do what is right. To live is always to feel some sense of what you’ve lost. She can be contacted at Ravenwings@comcast.net.

SOLA SIENA Born in the US, raised and educated in Italy, Sola Siena recently moved to the Pacific Northwest from a small community in the White Mountains of Arizona, a harsh and beautiful landscape on the southern edge of the Mogollon Rim. A retired chef, she works currently as an optometrist and is Vice-President of White Mountain Animal Sanctuary, a nonprofit rescue organization for displaced and orphaned animals, both wild and domestic. In 2012 she completed Stanford University’s competitive two-year novel program that honed her writing skills and laid a solid foundation for continued improvement of the quality of future works.

She is drawn to rich and textured stories that occupy the animal-human interface and explore the complexities of our relationships with each other and non-human creatures. Her first novel, Kentucky Blood, is such a tale and was chosen by bestselling author Tom Franklin as “Best of” the Novel workshop at Eckerd College in 2013. The first three chapters were published in their literary journal, Sabal. She is currently deep into the research and writing of her next novel titled: Men, Not Their Fathers.

WILLIAM F. WALLES writes mainstream fiction. A survivor of thirty years of nonprofit leadership, he witnessed the terrible and dangerous life choices of individuals drained of resources, hope, and strength. His fiction focuses on the forces that drive people to savage each other: Pride, Power, and Money. His newest novel is All About The Money is available in paperback and as kindle through Amazon as well as your favorite independent bookseller.